Shelves are essential fixtures in your shower area for holding your bath necessities. Make them look stylish in many ways by checking these shower shelves ideas out!

If you’re the type to use many bathing essentials when washing yourself up, having enough space to hold them would be necessary. The same holds if you’re sharing the shower area with other family members. While you can argue that these products can just be left on the floor, it’s undeniably messy and unsafe.
Shower shelves are products to turn to in such cases. There is a wide variety of shower shelves that you can use, differing in appearance, type, and who made them. You can even take the craft into your hands by making a DIY shower shelf. In this article, we have compiled ten shower niche ideas that you may use to achieve space-saving but stylish shelves.

What to Use for Shower Niche Shelves

The material that you should use for your shower niche shelves actually varies depending on the design that you want. For instance, you may want to opt for either metal niches for better strength or glass niches for style. Tiled ones are also popular options to take. Check out the different styles we compiled by reading on.

Traditional shower shelves generally feature a design that protrudes from the walls of your shower room. They take up space and may also be counted as a hazard in case you bump your head against them. However, what we featured in this article are shower niches, which refer to shower shelves that are built recessed to the wall. Find out more about them below!

Come to think of it. The main purpose of having a shelf in your bathroom is the storage of your bathing essentials. You don’t need to go for overly designed ones as a minimalist one actually does the job. Like this lit shower niche just below the shower, its design makes up for an aesthetic but functional built-in shower shelf.
The recessed design features a relatively wide compartment. Plus, its appearance goes hand in hand with the shower wall — having that marbly design. You can forgo the light when designing yours but you should note that it improves the visibility of your shower niche. Having clear sight of your things is needed as shower niches often have no stopping features for anti-fall purposes.

A tiled shower wall is something very common in most bathrooms. If yours feature them too, you want your shower niche to have a design that matches your bathroom’s overall appearance. Take a look at the tiled shower niche above, and you will see that the crafter decided to keep everything uniform.
If you are not hiring a worker to make your shower niche, one technique you can apply when tiling is to start with the back portion before the sides. It is the easiest way to do this, and it allows you to properly measure the tiles that go to the sides. Make sure that your niche has enough depth as the tiles will also take up space when set in place.

If you have a relatively extensive shower wall, you may want to go for a wide built-in shower niche. Such a design offers more storage for you and also makes use of empty space. Like this one, the niche goes from the wall where the showerhead is attached to the other opposite wall. The designer also made sure that the tiles used for the niche aligned with the ones on the walls.
While such a long shower niche may look monotonous and boring, you can use a contrasting tile trim to accentuate its design. Notice that the shower knob is right below the built-in shelf, almost aligned with the essentials you use when washing yourself up. With the wide design of the niche, you have more control over where to place your things and maximize convenience.

A corner shower shelf would be optimal for you if you have a relatively small shower room. By placing your things in the corner, the possibility that you accidentally nudge your bathroom products lessens. Plus, it also offers a different kind of shower niche design aside from the typical ones that stretch horizontally or vertically on walls.
Such a design can be seen in the picture, where a shower niche is built in one corner. It is placed pretty far from the showerhead, but it indeed looks less crowded than other niche designs. You can also make multiple niches at the corner for better organization.
How to install corner shower shelf niches
Installing or making your corner shower niche requries the appropriate tools and planning. The online web contains various resources and all you have to do is dig for them! Watch this video featuring a tutorial of building corner shower niches if you want to learn how to install one.

For DIY shower niches, the best thing is that you can explore and imagine designs as much as you want. Your imagination is literally the limit. Since there are so many ideas that you can think of, we chose to feature one DIY project that offers a pretty unique appearance.
This project made use of a shower niche mold that you can buy at shops. The crafter laid out all the tiles and attached them to the mold at the start. The LED lights were configured. Then, it was installed on the shower wall. You can watch this video of crafting an LED Lighted Niche for more detailed comprehension.

A walk-in shower is often found in spacious bathrooms, and they generally have big proportions. This shower niche in the picture features an extensive recess that goes from the entrance to the wall where the shower head is on. Such a design would be suitable for families who share a common bathroom or those who have numerous shower products to use.
You might feel like building such a huge niche is unnecessary. However, you may also place plants and other greens suitable for bathrooms to decorate it. Plus, the extra space means that you no longer have to build other shelves when needed in another time.

An outdoor shower is something that you may want if you wish to have a bathroom ambience that is intimate to nature. This outdoor shower features a wall made from cut rocks, paired with a minimalist shower head, with a wooden floor and other furnitures.
To go with the overall appearance, the shower niche installed at the side is also made of polished wood, which is wide enough to accommodate several bathing products. The edges of the niche also protrudes a bit from the rocky wall with its depth. Note that there is some distance between the shower head and the niche, which prevents the wood from degrading easily. 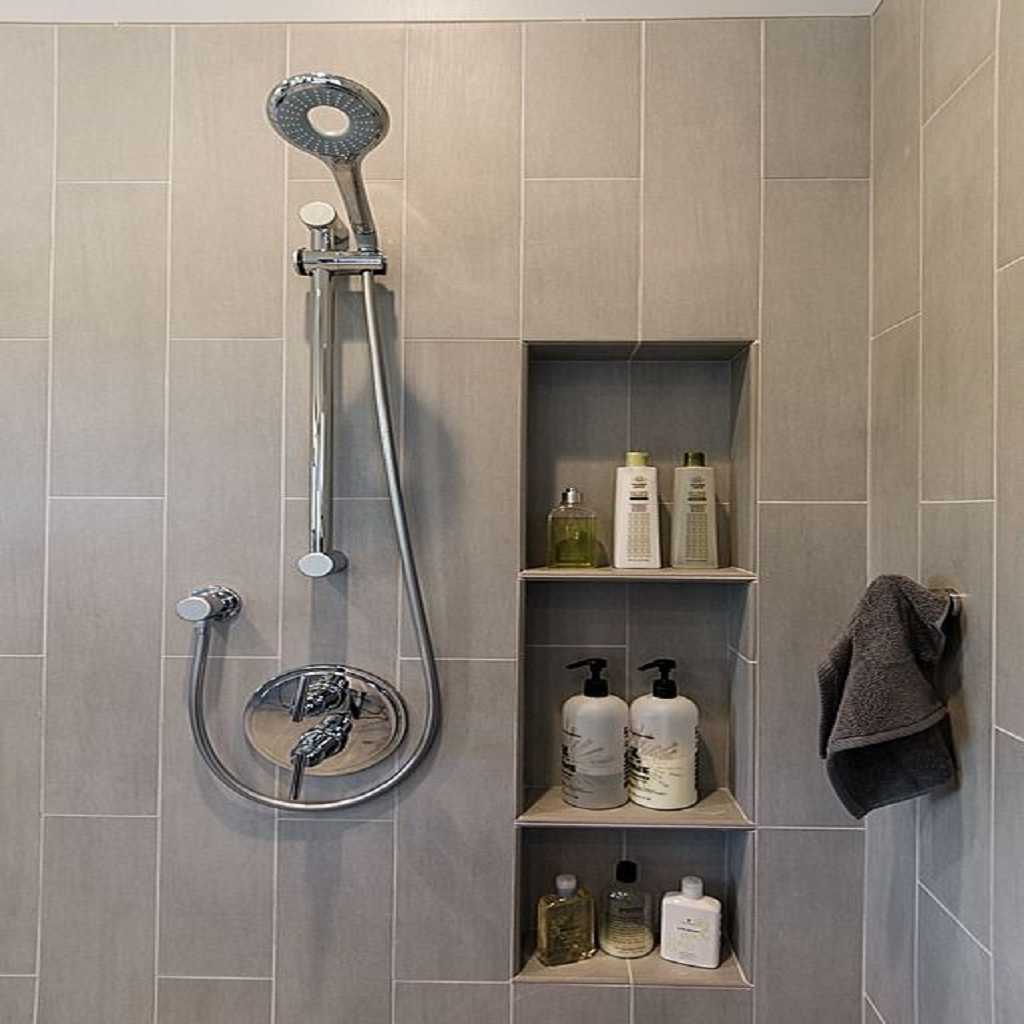 A shower stall is the typical choice for people who have limited bathroom space. Usually, the shower area is just covered by a shower curtain, with little space to move about. Hence, opting for a stack of recessed shower shelves is the way to go just like the one in the photo. The recessed design also prevents crowding that often occurs when opting for traditional shelves.
Near the shower head, a vertical recess should be made. This vertical recess would be divided into how many layers you want, of which the size can be different from or similar to each other. The division need not be too thick to save space. This way, you have plenty of storage even if your shower stall is pretty small.

One characteristic of modern bathrooms is that they tend to go minimalist. Well, while accented tiles and ones with intricate appearances are not out of style, modern ones are more simplistic. The picture above is one such example, featuring a uniform black color with touches of wooden styles.
Different from other shower niches that are placed relatively high, this one goes under the shower head and is a little lower. It stretches from wall to wall, and has good lighting that enhances its appearance. Though simplistic, the overall design looks luxurious, provides enough storage, and has good visibility.

This shower niche featuring glass components that we included in this blog is a bit similar to the shower stall shelf idea we mentioned earlier. It is also placed adjacent to the shower head, with a vertical recess that is divided into several layers. The only difference is that the dividers are made of glass, and that the rear portion of the niches are tiled with a different style.
It is best to hire a professional for making a glass shower niche to ensure that the materials used are strong enough. Note that the glass shower niche can also be designed in different ways, which may depend on the bathroom size, shelf size, and more factors.

The bathroom is one of the most important places in one’s home. Ensuring that it contains all that is needed, from bathing essentials to bathroom fixtures, is necessary. Shower shelves are good components that will keep them organized.
Of course, you want your shelves to be space-saving and stylish. In this article, we have compiled several eye-catching shower niches ideas to try inside your home. Remember to consider your bathroom size, storage requirements, and other factors when choosing a shower niche design. Visit our website,Guy About Home, for more home-improving ideas!

Guy Keenan·March 4, 2021
There are no comments yet No comments