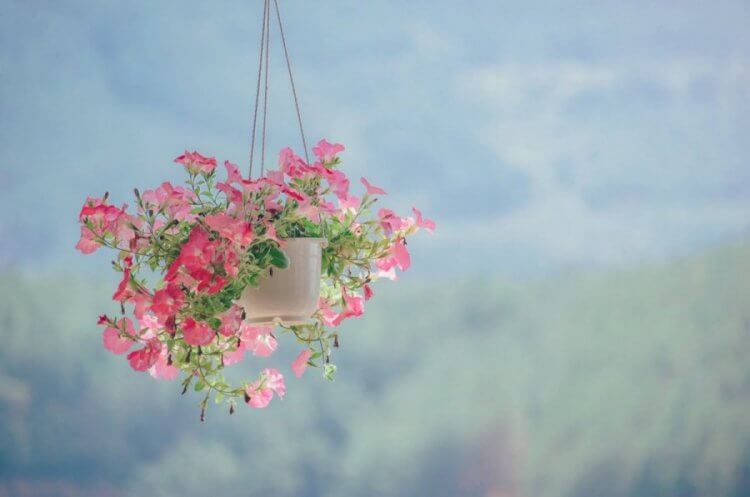 Hanging plants are a thing of beauty. If you think about it carefully enough, you can actually find many locations in which they can be hung from. It’s not difficult at all, whether they are placed indoors or outdoors! They serve as wonderful decorations; and as a bonus, some plants even give off a few health benefits.

As far as garden quotes go, the famous scholar and psychiatrist, Sigmund Freud, said: “Plants are restful to look at. They have neither emotions nor conflicts.” And this very much relates to the fuschia. If his quote was a picture, it’s not hard for this plant to be the subject. The fuschia plant has a way to make you calm, restful, and at ease.

Few compare to its majestic aesthetic. In the language of art and computers, colour gradient, also called “colour progression,” is the visual representation of a range of colours that are position-dependent. In simpler terms, it is basically the view of gradual, incremental change from one colour to the next. The fuschia is a blatant example of that.

They can go from reddish to pinkish, pinkish to white, or even magenta to violet. It is a sight to behold. Fuschia, or as is its scientific name: “Fuchsia magellanica,” is a genus consisting of small trees and shrubs.

Here are a few varieties of fuschia:

There are few things to say about this one that hasn’t been said already. Geranium is a common beauty. One you would not ever regret growing for yourself. Crane’s Bill is its other name. It is a genus of 400+ flowering plants. Capable of growing from 4 inches to about 4 feet tall, this plant can be found all over the world. Though, it originates from the wonderful climate of South Africa.

One fun fact about its name, Crane’s Bill, is that it is a direct reference to its seed capsule looking like a crane’s bill (the animal, not the machinery!). Who would have thought, am I right?

Geranium can be used in many planting styles, aside from hung. They can be potted plants, bedding plants, etc. They are known for being resilient and aren’t difficult to raise at all. Its scientific name is Pelargonium.

Ivy has many different shapes of its leaves and type of foliage. This plant does not need direct sunlight, and it is low-maintenance, so raising them indoors is ideal. For the outdoor ivy, put them in a shaded area. Its scientific name is Hedera.

Arguably the most beautiful and view-enhancing plant when placed in a hanging basket. It is heavily popularized by its cartoon character counterpart from the “Batman” series: Poison Ivy.

Also, just as a bonus, if you happen to be a photographer, they make excellent background props for your shots!

Contrary to its name, the spider plant is a much-welcomed house guest for many gardening and plant enthusiasts. Its scientific name is Chlorophytum Comosum, but they are also known as the Airplane Plant or Ribbon Plant. Basically considered a houseplant, they are also fantastic in outdoor scenarios– given that they are grown protectively.

However, they may be a challenge in raising them with other plants. Hung in a basket alone seems to be it’s more preferred growth area. As with geranium, this type of plant is native to Southern Africa. Keep the spider plant away from boron and fluoride because they are potentially damaging. Also, when growing, don’t be surprised that small white flowers might sprout from the shoots.

Most of you will have probably already heard about this one. It’s famous for its classy, clean white aesthetic, but it has purple and reddish variations as well. Its scientific name is Lobularia Maritima, and they’re also known as “Sweet Alison.”

This elegant one is perennial. It needs average, well-drained soil and regular watering. Also, it’s best to keep this on well fed on sunlight.

For this plant, the soil needs to be average, and well-drained. They are drought-tolerant but will still need regular watering. Another good thing about this plant is that they are heat-tolerant, meaning that for those in more dry/hot, tropical countries, you won’t have to worry about them as much. They also do not need very much exposure to the sun.

The family “Balsaminaceae” is made up of Impatiens. Also with the genus Hydrocera. They’re also known as the snapweed, patience, and jewel-weed. Vastly found in Northern Hemisphere, this genus has about a thousand different species.

Verbena is a genus in the family “Verbenaceae.” Here are a few types:

There are about 260 species of plants that flower for the Verbena. This family is most commonly found in subtropical and tropical climates. This genus originates from Europe, South America, and North America.

We suggest growing these under heavy sunlight conditions. Any type of Verbena makes for great decorations.

One of the most popular flowers. I’m willing to bet my life savings that you’ve heard of this one before. The thing you might not have heard before is the fact that there are actually more than 20 types. Here are a few in different color types:

Begonias usually have stylish leaves and elegant flowers. This compact plant with dense foliage is a genus with 1400 species of plants that flower. They are most commonly found in Southern Asia, Central America, Africa, and South America. Begonias are usually easy to grow and do best in the shade. They suit both indoors and outdoors as well!

Get as much as you can properly care for

With the extensive selection available (even beyond this list), it can be easy to go crazy buying and raising as many types as possible. More to the point, this is also tempting since they are all gorgeous. But one should only raise as much as they can care for. After all, a house of hanging dead plants is most likely not the look you were aiming for!

Photo by Min An from Pexels

Previous article How To Make Homemade Leather Cleaner And Conditioner

How To Take Care Of Succulents

Guy Keenan·September 14, 2021
There are no comments yet No comments