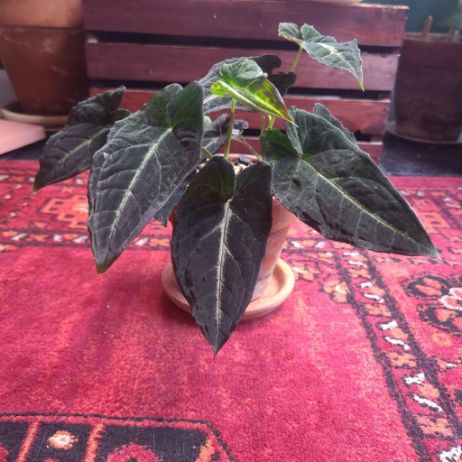 With its alluring foliage and stark appearance, there’s no doubt that the Syngonium Rayii variegated is a head-turning houseplant. But believe it or not, there are a lot of things you need to know before you can grow a beautiful Rayii Syngonium by yourself.

The Syngonium Rayii, commonly known as the Velvet Syngonium, is a type of arrowhead due to the shape of its foliage. It is a notable tropical houseplant that can survive ambient temperatures. Because of this, this aroid plant became a popular choice among indoor gardeners. But just like other Syngonium variants, growing the Syngonium Rayii plant has requirements, as well.

Here is the basic information about the Syngonium Rayii:

A variegated Syngonium Rayii is quite stunning. Usually, variegating the plant would change the color of its foliage. You could achieve green-and-white combinations or something that is akin to silver, pink, or cream. If the plant is still young, the color of the leaves is typically solid green. In some cases, a mixture of cinnamon or cream could be spotted.

The Syngonium Rayii Dark Form is considered the most beautiful form of the Rayii Syngonium. It has a dark, velvety appearance on its leaves while showing variegated stripes in the middle. The quality of the Dark Form is quite unique, making it a rare find, even for the most avid houseplant growers.

The Green Form of the Syngonium Rayii is actually its standard appearance. As mentioned, the foliage of the plant is green, while the middle features silvery stripes. Meanwhile, its overall texture is velvety, similar to the Dark Form. Hence, the difference between the Green Form and Dark Form is the “darkness” of their leaves.

Interestingly, Syngonium Rayii can sprout a runner. You don’t have to worry about this since it can encourage new leaf growth. What you need to do here is to cut the runner and root the node in another pot or perlite box. Alternatively, you may also wrap the runner in a fern pole.

Both the Rayii and Wendlandii plants belong to the Syngonium genus. These two are arrowheads due to the shape of their leaves. At the same time, their foliage has silvery stripes and a velvety texture.

Their primary difference are the following:

Here are some of the essential details about the mature Syngonium Rayii plant that you might not know yet.

Syngonium Rayii is actually a rare type of Syngonium plant. This is due to the stark, dark coloration of its foliage–much darker than its counterparts. So don’t get surprised if this plant is a little bit costly.

How Tall and How Big Does Syngonium Rayii Grow?

The Syngonium Rayii size may vary. But on average, the plant can grow as tall as 8 inches tall, so it is not actually a tall plant. Once it matures, its leaves will grow as long as 4 inches and as wide as 3 inches. Notable long vines can also be noticed as the plant starts nearing its maturity.

Aside from being rare, the Syngonium Rayii is also a fast-growing plant, especially if it receives regular watering and nourishment. The figures aren’t exact, but its growth rate is the fastest during summer and spring.

Where to Place a Syngonium Rayii?

The proper placement of the plant is the key to its healthy growth and survival. Keep in mind that the Rayii Syngonium has a meager drought tolerance. So it would be best that you place it in an area where it receives indirect sunlight only. Either western or eastern exposure is allowed, but direct exposure is highly discouraged.

In this section, you will learn the basics of Syngonium Rayii care.

As mentioned, it is deleterious for the plant to be exposed to direct sunlight. While it needs sunlight to survive, it isn’t durable enough to survive extreme heat. Ideally, the plant should only receive indirect sun exposure for at least four hours a day. For the Dark Form, more indirect light exposure is needed so that its foliage grows abundantly.

You need to keep the soil of the plant moist but not soggy. Hence, it is essential that you use a well-draining soil mix and pots with drainage holes so that the water can flush optimally. If the first two inches of the soil are dry, then you should water the plant again. You need to water the plant once a week during summer and once every two weeks during winter.

The ideal temperature for the Arrowhead Rayii is about 40 to 90 degrees Fahrenheit. This is the ambient temperature of most indoor rooms. Because of their tropical origins, the Syngonium plants, including the Rayii Syngonium, enjoy good levels of humidity. Keep the indoor humidity of your home at around 40 to 50 percent so that the plant can bloom properly.

As a fast-growing plant, many think that Syngonium Rayii is a heavy feeder. But it is not. You can apply to fertilize the plant once a month during summer and spring. Any fertilizer for foliage houseplants can work. By the way, make sure that the soil isn’t arid when you apply fertilizers. In this way, root burning won’t occur.

Despite being a fast-growing plant, the Rayii Syngonium doesn’t require frequent repotting. You only need to do this task every two years or so. It’s recommended that you repot the plant during summer and spring because these are its growth season. The pot you choose must be bigger than the previous pot you used. Also, make sure that the pot has drainage holes in them.

Syngonium Rayii is a low-maintenance plant. It doesn’t need too much pruning. However, it also sprouts stolons and vines once it matures. You can cut these growths and use them for future propagation. Alternatively, you can place poles near the plant where these vines can climb.

Here’s how to propagate the plant through stem cuttings.

The Syngonium Rayii requires extra care so that it won’t experience the following problems:

Why Are My Syngonium Leaves Turning Yellow?

Numerous culprits can cause your Arrowhead plant to grow yellow. Specifically, inadequate sun exposure, under-watering, overwatering, and diseases could cause the leaves of the plant to turn yellow. Following the care tips I’ve listed here will prevent this thing from happening.

Why Are My Syngonium Leaves Not Unfurling?

It’s a problem if the foliage of the Rayii plant doesn’t unfurl. Several reasons could be blamed here, such as pest infestation, poor humidity, and putting too many fertilizers. It would be best that you address these issues to ensure that your plant blooms healthily.

Where to Buy Syngonium Rayii

Because this plant is rare, there’s a possibility that it isn’t available in your local garden stores. Finding the plant is not that easy, especially if you are looking for the Dark Form. Fortunately, numerous plant cultivators sell their propagated Syngonium Rayii online. Etsy, Bunnings, and other independent sites have Syngonium Rayii for sale.

How Much Does Syngonium Rayii Cost

The Syngonium Rayii price isn’t as inexpensive as other Syngonium variants due to its rarity. On average, the price of this plant ranges from $25 to $50.

Overall, the Syngonium Rayii is an excellent addition to your indoor home. Its small yet stunning appearance can make it a centerpiece attraction to your living spaces and home gardens. Just make sure that you take care of the plant properly by following the care requirements I’ve listed here.